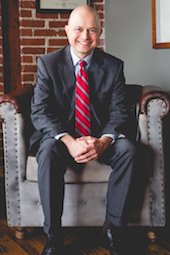 Benjamin S. Persons, IV is dedicated to achieving the best possible results for his clients. Mr. Persons has been practicing law in Georgia for over 12 years and 100% of his practice is devoted to personal injury and wrongful death litigation. Mr. Persons represents people not corporations.

After receiving his undergraduate degree from the University of Georgia 1996, Mr. Persons obtained his Jurist Doctorate from Mercer University's School of Law in 1999. He spent the first several years of his law career working for prestigious Atlanta law firms representing large Fortune 100 corporations and insurance companies. He specialized in the defense of cases involving catastrophic injury and death resulting from tractor trailer collisions and medical malpractice, representing the Nation's largest trucking companies and the primary insurer of doctors in Georgia. Mr. Persons knows the strategies used to oppose injury and wrongful death claims and uses his unique knowledge for the benefit of his clients.

American Association of Justice
Member Since: 2010

Contact Us
Practice Areas
Client Reviews
★★★★★
Ben Persons is ABSOLUTELY WONDERFUL! The research and time spent on my case was outstanding. He fought for me and my family every step of the way and anytime I had a question he was always there. The work ethic of the Persons Firm is amazing. Ben helped to introduce evidence into my case that made the defense stand up and take notice. Thank you Ben for everything. Toby George
★★★★★
Ben and his staff of Tricia and Katrina did an outstanding job of keeping us informed as our case progressed. We believe they all represented us well and would recommend Ben to anyone needing his services. Thanks Ben, Tricia, and Katrina. Patricia Nickel
★★★★★
Absolutely a great Attorney. Personable, Efficient, Fair. Knowledgeable and many more attributes. After interviewing four other attorneys, I chose Ben. His staff handled all the many problems with my motor vehicle accident giving me an honorable settlement. He was a Blessing to us. Bill Hogg
View More
Submit a Law Firm Client Review